There’s a reason I’m fond of Bogota, Colombia nightlife – especially in the amazing neighborhood of Chapinero.

For example, let’s take it back to one Friday I’ll never forget.

All the students were out of class and ready to start the weekend. We walked down the stairs and into the club.

All eyes were on us: Four gringos in an area of Bogotá where they never saw foreigners. Within 20 minutes of getting our drinks and finding a table, we were surrounded.

I looked at my three friends – none of us were going anywhere. Why would we want to? We each had 2-3 college-aged Colombian girls around us, wide-eyed and smiling.

That’s when I realized: Chapinero nightlife was the best in Bogota. Period.

Nearly no other foreigners, sexy Colombia girls, and cheap prices. What’s not to love?! Let’s just say Bogota, Colombia nightlife treated us pretty damn well that evening – if you know what I mean.

Getting Away From The Tourist Traps

Most of the info online about nightlife in Bogotá is aimed at tourists and backpackers. So guess what you get when you go to the places Lonely Planet recommends?

I’m going to give you the tips you need to party in Bogotá. The places where you can rub shoulders with the locals without losing your iPhone.

This stuff isn’t anywhere else online, so read on.

…Why Should You Listen To Me?

I lived in the Chapinero neighborhood of Bogotá for 12 months. I know where to go and where not to go. In this article, I’ll give you the lowdown on the best bars and clubs in Bogotá.

But first, some background. This Chapinero nightlife guide is detailed. So, pay attention, mate.

What to Expect Of Nightlife in Chapinero

Before you go wandering the streets of Bogotá, you need to know what you’re getting into.

Chapinero is one of the largest neighborhoods in Bogotá. Nobody (locals particularly) really knows where it ends and where it begins. Search online for Chapinero and here’s what you’ll read:

Chapinero has a large gay scene. True, but I’ll tell you where to avoid unless you like getting catcalled by Colombian dudes.

Being such a big neighborhood, you can find all types of music. If you’re into the rock scene, if electronic is your thing, if you like to move to Latin music, you can find it in Chapinero.

Partying in Chapinero is cheap – much cheaper than partying in Usaquen or in Zona T.

But don’t assume the low costs come with danger. If you listen to the safety tips I give in this article, you’ll be safe.

This is one of the best parts of Chapinero nightlife. There are tons of Colombiana college girls around at all times.

If you like your women between the ages of 18-24, then the nightlife in Chapinero will bring a smile to your face. There are no old ladies in Chapinero, fellas.

Theatron is the biggest club in Chapinero. In fact, it’s the biggest gay club in all Latin America. But before you roll your eyes and skip to the next section, come closer and listen to this:

LOTS of straight girls party at Theatron. Trust me. This may be a gay club, but you’ll find plenty of girls looking to meet foreign men here, too.

And here’s why I love Theatron:

Zero competition. You’ll have your pick of the women.

Best night of the week to hit Theatron?

You can party at Theatron on Thursdays, Fridays, and Saturdays. If Monday is a national holiday, Sunday night will be a big party night.

Avoid Thursday nights. The club is half empty and the ratios suck.

If you enjoy the nightlife in Chapinero but want to avoid getting sucked into (pun intended) the gay scene, do this:

Avoid the clubs and bars around a park called “Parque De Los Hippies” – zero girls in those clubs. Seriously, it’s a waste of time in this area. 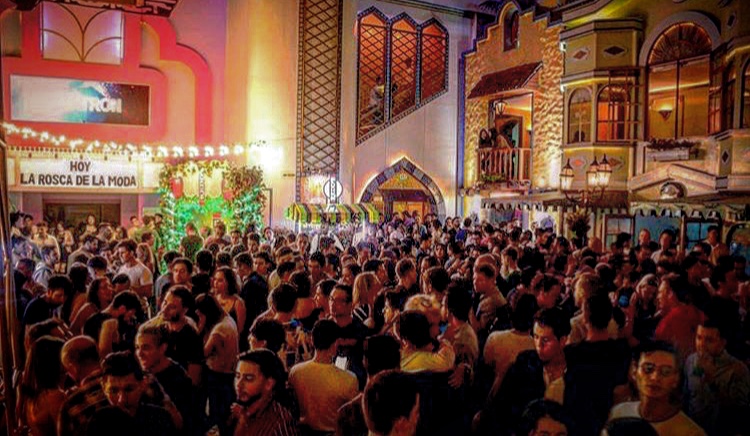 There’s some girls here in Theatron.

Now, Theatron certainly isn’t the only club in Chapinero. In fact, there’s dozens. You won’t run out of places to party here, especially if you get off the beaten path a bit and know where the sexy girls go.

That’s where I come in. Here are some more under-the-radar Bogota, Colombia nightlife options around Chapinero:

This is my favorite place in Chapinero. Video Club plays electronic music and stays open late. There’s cheap booze, lots of space, and some drugs around. The girls here are generally college chicks looking to party hard.

Another massive, upscale electronic club in Chapinero. I wasn’t a huge fan, but this place is big and probably the nicest spot around Chapinero. A good place to bring a date.

Straight Latin music almost every night here. I loved the vibe, especially when they hit bachata hard. If you’re a decent dancer, you won’t spend much time alone here – especially as a foreigner. Probably best to bring a buddy here.

You’ll find this local spot on 7th Avenue, near the corner of 51.Guadalupe plays straight Latin music all night. I once took a girl here on a date.

She taught me how to dance bachata, salsa, vallenato, merengue – in 4 songs. One after the other! More of an older crowd 25-plus. You won’t see any more gringos here.

An underground bar on 7th and 57 that looks like a candy store from the outside. Get ready for karaoke, psychedelic decor, salsa dancing, and general messiness on weekends.Nobody takes themselves too seriously partying at Treffen.

Smaller Bars In Chapinero: For Dates and Pre-Drinks

Sometimes you just want to have a beer or three with a cute Colombiana. Or maybe you want to down a few drinks with the boys before hitting the club.

That’s exactly what these bars in Chapinero are for:

On the corner of 7th and 59. This bar is outdoor but covered by a canopy to protect you from the Bogotá rain. The staff light the candles in the middle of the table, giving the bar a dark and romantic feel. Wide selection of local beers and excellent food – Try the thin-base pizzas, you’ll thank me.

On 54 and 4th avenue. More of a traditional pub vibe. Craft beers and food. The price is up there for Chapinero. But the bar has a nice, cozy atmosphere for a date.

Many people who have never visited Colombia before are fearful of crime. Let me put your mind to rest:

The city isn’t the murder capital it used to be in the early 90’s. Colombia has cleaned up its international reputation a lot. These days Bogotá is no more dangerous than any large US city.

But you still need to be smart.

Avoid Caracas Avenue in Chapinero and the areas around it. Take an Uber to the clubs and back, don’t flash your phone or electronics around at night. Follow these tips, you’ll be fine.

There is an area on the fringes of Chapinero called Santa Fe. Locals call it “la zona de tolerancia” (red-light district). Santa Fe can be fun and dangerous in equal degrees.

The only reason I’m mentioning Santa Fe here is for guys who might want to go see a strip show and get a lapdance.

But I recommend against visiting Santa Fe.

Chapinero has plenty of other areas where you don’t have to look over your shoulder and hold on to your wallet all night.

If you do decide to risk it, here are some safety tips:

Bogotá nightlife can be more than fruitful for the single men out there. But sometimes, instead of going out to eat, you want to stay at home and order takeout, right?

For that reason, I prefer Colombian Cupid.

You have to pay to message girls on Colombian Cupid. Thus, most foreigners don’t use it, well, at least not as much as Tinder.

Plus, you don’t have to match with a girl to message her once you pay. So, most guys find they have better success getting Colombian girls to meet for a date from the site.

I love Tinder and nightlife in Bogota, but I won’t front…

Colombian Cupid is my bread and butter while in Bogota. It just works and the girls using it actively really want to meet foreign guys. No bullshit.

I hope I’ve convinced you of the good times to be had in Chapinero.

There are fewer foreigners and more chicas looking to meet a fun-loving guy from a faraway land.

But don’t tell everyone. I want to enjoy my rock star status with the girls in the club when I get back to Bogota.

Keep the secret to yourself 😉

Save Chapinero nightlife before Bogota gets overrun by foreigners like Medellin. Do it for the real ones.

P.S: You’ll need to speak a little Spanish while rolling out at night in Chapinero!