It was later and my phone beeped. New message from this Colombian cam girl. I smiled. She was fine. Even in a country filled with hot women, she stood out.

It was the Colombian cam girl I had a date with the night before.

Was it a booty text. My fingers were crossed as she replied…

“Trabajando. Pero quiero estar acostada viendo una pelicula tambien.” / Working. But I would rather be lying in bed watching a movie.

I wanted her. Badly. And this Colombian cam girl seemed to be making it easy for me. Well, I could only hope at this point.

“Vente para aca cuando termines.” / No worries. Come over when you finish.

Why was the Colombian cam girl was so keen to come over?

I guessed she was worked up simulating sex on her cam shows. Maybe she wanted to vent her frustrations and do the real thing.

45 minutes later she arrived at my hotel. She stepped into my room, dropped her bag on the desk, took off her leather jacket, hung it over the back of the chair, and jumped on my bed:

“Quiero ver una pelicula!” / I want to watch a movie!

I got the message. And it had nothing to do with a Netflix movie. If ya know what I mean. But I decided to warm her up even more.

How I Met The Colombian Cam Girl

Back up a few weeks. I had spotted a girl on Colombian Cupid.  She was cute, but no bombshell. I rated her a high 6/ low 7. I ran my standard online dating game – jokes, hinting at an interesting lifestyle, etc.

Her responses were weak. Typical Colombian girl. Flaky and chatting to dozens of guys at the same time.

Anyway, I invited her out a couple of times. She gave me some excuses. Whatever. Not being super hot, by Colombian standards, I gave up quicker than usual.

A few more weeks passed by and I went out with some friends to a VIP club in Bogotá. That night, somebody snapped a photo of me holding a bottle and I had a hot girl on each arm. I knew that photo showed value up the wazoo, so I set it as my Whatsapp profile pic the next morning.

30 minutes after I’d uploaded the photo, the Colombian cam girl messaged me. She was warmer now…

“Que has hecho?” / What have you been doing?

It looked like lady luck had worked in my favor.

She took the bait. Hard. It’s what I had wanted the whole time.

Now, it’s Colombia and she’s a cam girl. There was a little more to the conversation than that. A little finessing – so to speak. But I’ll spare you the details for another day.

This is a tale of triumph, not texting. So…

At half-past eight, while I was I waiting in line to buy popcorn, cam girl arrived. Late for anywhere but Colombia. Late for anyone but a hot Colombian cam girl.

She was wearing heels, tight jeans, and a big fur coat. She wasn’t wearing much underneath – a white top that had either shrunk in the wash or was meant for children aged 8-10.

Damn, I wanted to run my hands under that fur coat! 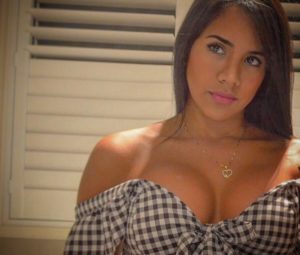 My girl was not this hot, fellas. Sorry.

But I showed restraint and kept my hands to my popcorn while we watched the movie. The movie sucked, but I didn’t care. I spent the two hours thinking about the Colombian cam girl.

After the movie, I dropped her off. I didn’t make any moves. And that what made her want me even more. She was so used to desperate guys begging her for some ass, that she was turned on by this disinterested gringo.

Over the next few weeks, we established a routine. She came over after finishing her shift at the cam show studio.

Sometimes she sent me links to her chatroom when she was working. I never looked. Why would I want to read the menu and salivate when I can get the food delivered to my place and enjoy every mouthful myself?

I got a big rush of power and confidence knowing that all these idiots were chatting with her all day, declaring their undying love, sending her gifts and money…

And at the end of her shift, she took a taxi to my place, sucked me dry and rode me like a cowgirl – all for free! I didn’t have to pay her taxi or take her out to eat.

Be Careful Out There, Fellas

But my Colombian cam girl story didn’t have a happy ending. She went crazy – I guess that job messes with girls’ heads.

One night she came over at 10 pm. We banged as usual. Later, as we were lying in bed, she whined:

I told her I had eggs and pizza in the fridge – typical bro stuff. She said she didn’t want eggs, she wanted cookies. I told her everything was shut and that she had zero chance of getting cookies at that time of night.

She huffed, got out of bed, put on her clothes and stomped out of the room. I lay in bed watching her tantrum, without saying a word.

I never saw her again. She was a ton of fun, but there’s many a fish in the sweet, sultry seas of Colombia. So, I chalked it to the game.