The Ultimate Man’s Guide to Nightlife in Santa Marta, Colombia

Nightlife in Santa Marta, Colombia can be one heck of a good time. And often, it’ll surprise you…

She stepped out of the shower wearing a towel.

“Tienes condon?” / Do you have a condom?

I wasn’t ready for the question. I sat on the bed watching her. She raised her eyebrow and looked at me.

My jaw hit the floor.

We met at the beach 4 hours earlier. I was partying on Rodadero beach in Santa Marta with a couple of my friends. We were drinking beers and catching up when a volleyball landed amongst us. An attractive girl came to pick up the ball, we got chatting, and somehow, our group merged with hers.

Introductions were made, along with self-deprecating jokes. I got chatting to Marielis. She had curly blonde hair, tan skin, and narrow hips. She had that spice for life that many Colombian girls have. I was hooked.

We spent the next couple of hours on the beach, drinking, talking, watching the waves, listening to music, and giving each other shoulder rubs.

One by one, our friends went off home. Eventually, it was just the two of us.

She asked me where I was staying, I turned my head over my left shoulder and pointed to a balcony with the lights still on. It was an Airbnb apartment I was sharing with my two friends for the week.

She looked up and said, “Vamos a ducharnos ahi.” / Let’s go and shower up there.

We both needed it. We’d been kissing and rolling around for the last hour. We had sand everywhere.

When we got to the apartment, she showered first. I sat on the corner of the bed, waiting…

That’s when she came out of the shower and dropped the question.

I did have a condom, but I needed a shower myself first. I raced past her, grabbed my only remaining towel and turned the water to cold to try and cool off my boner.

When I got out, Marielis was already dry. She was under the sheets waiting for me. I didn’t care about getting the sheets wet, so I threw off my towel and climbed into bed with her.

It was my first night in Santa Marta, Colombia. I had already seen the beach, and now I was in bed with a beautiful local girl.

It could only go downhill from there…

An Introduction To Nightlife in Santa Marta, Colombia

Search for info on Santa Marta online, or ask a Colombian, and you’ll read lots about the Sierra Nevada mountains or Tayrona national park.

But very little has been written about the nightlife in Santa Marta.

Firstly, there’s little going on in the bars and clubs from Sunday to Wednesday. But that gives you plenty of time midweek to get your tan at the beach, snorkel, and hunt jaguars at Parque Tayrona.

Okay, maybe not the last one.

Or simply relax while waiting for the Caribbean weekend to roll in.

What To Expect Of Santa Marta NIghtlife

Santa Marta is a laid-back city. But it’s maybe the best nightlife city in Colombia for its size. Colombians head to Santa Marta for vacation, so they’re ready to let their hair down away from the judgemental eyes of their local towns.

But don’t think it’s easy to get hot girls while you party in Santa Marta. Many of the hottest girls you see in Santa Marta will be on holiday with their boyfriends or parents.

You’ll find the majority of the nightlife in Santa Marta options in either the Centro or Rodadero.

Most of the bars and clubs in Santa Marta are around Parque De Los Novios, also known as Parque Santander. It’s also where you have the best chance of hooking up with a Colombian girl.

In Rodadero, you’ll mainly find Colombian families on vacation at the beach.

Interested in Taganga nightlife? You’ll meet lots of European, American, Israeli, and Aussie tourists. Dreadlocks and weed smokers might not be your thing but the girls there are easy to bang.

There are a few prostitutes in the bars and clubs of Santa Marta – this is to be expected anywhere where lots of gringos visit in Latin America – but not nearly as many as in Cartagena. 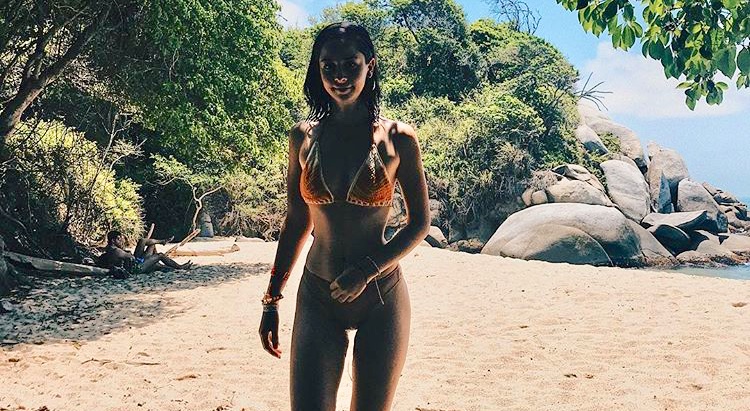 The only people I met in Santa Marta who spoke some English were the people who worked in Taganga and dealt with tourists every day.

For communicating with everybody else in Santa Marta, Spanish is essential. Not only will you get ripped off on everything from rent to recreational sports without Spanish, meeting girls in an organic way and having pleasant dates can be a chore if you don’t speak the lingo.

So don’t feel bad if you have to ask the waitress to repeat herself a few times.

Oh, and if you’re looking to learn how to flirt with Colombian girls in Spanish, check this out.

The Best Clubs In Santa Marta To Meet Women

Santa Marta nightlife is good. There’s a decent amount of places to party and the scene often is international.

If you’re looking for the best place to party, check out La Brisa Loca Hostel. The rooftop bar gets packed on the weekends and you’ll find the place crawling with good looking Colombian girls and some backpackers.

That’s the absolute best spot in the city. Here are a few others that work for meeting chicks, too:

A Guide To Santa Marta Nightlife for Men

You might visit Santa Marta intending to hang out at the beach all day and trek through the jungles of Tayrona park.

But with the suffocating humidity and unrelenting sun, I wouldn’t blame you for staying in all day cooling under the air conditioning and then going out when the sun goes down to explore the underworld of Santa Marta.

P.S: You can meet girls at night in Santa Marta, Colombia. However, there are far better ways to meet women in this coastal city. Click here to learn more!